The largest of the American Poplars and largest hardwood in the Western United States, Black Cottonwood grows natively from Kodiak Island in Alaska to Northern Baja California, and as far east as the west side of the Rocky Mountains in Colorado.

Often thriving along rivers and streams, you’ll find the trees most abundantly in the Puget Sound basin, and in the Columbia and Willamette river basins in Washington and Oregon. But you’ll also spot the “California Popular,” as it’s also known, in the Faroe Islands and Iceland, where it’s become one of the most widespread trees since being naturalized there over the last century.

The fastest-growing hardwood west of the Rockies, mature Black Cottonwoods generally reach heights between 125 and 150 feet tall, though occasionally max out at 225 feet. Widthwise, they commonly grow 4 to 5 feet across, but have been known to reach up to 9 feet in diameter.

Interestingly, the Black Cottonwood gets its name from two of its distinguishing physical characteristics. While the “cotton” reference comes from the “cotton-like” fibrous strands that burst out of it’s seed capsules – creating the unforgettable illusion of tiny clouds caught in the tree’s branches – the “black” distinction for this particular species alludes to the tree’s rough, dark-colored bark.

For millennia, Native North Americans relied on the inner bark and resin of the Black Cottonwood for food and medicinal purposes, especially respiratory ailments. Not just for themselves, but their horses, as the animals happily devour the trees’ foliage.

Today, because it’s so well adapted at colonizing and dominating areas decimated by floodwaters, Black Cottonwood has become a preferred pioneer species for replenishing disturbed riverbanks, deltas, and alluvium landscapes. It can even restore destroyed upland sites with adequate moisture.

And yet, ironically, while the species prefers well-irrigated sites, it’s also considered drought tolerant. In fact, during the spring and summer months in Nevada’s Great Basin and the Modoc Plateau in California, the light green leaves of Black Cottonwood trees often indicate sources of water in the otherwise arid desert terrain.

A super hardy species in almost any landscape, Black Cottonwood is arguably even more impressive once its harvested — especially the burl. Breathtakingly handsome, it’s pale yellow to nearly white sapwood blends artfully into its light brown heartwood, which may contain dark streaks. Its grain is straight to slightly irregular, but can be interlocked, with a uniform medium texture. But it’s when the wood produces its eye-stopping burl that it reaches new aesthetic heights, truly becoming a rare wonder to behold. 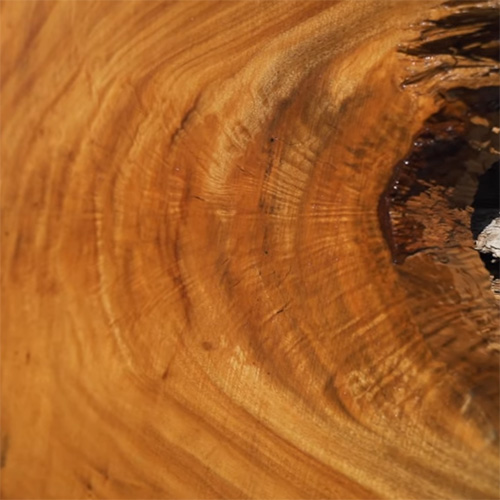