A slow growing evergreen, Camphor is a species you’re probably more acquainted with than you realize. Well, at least your nose likely is — especially if it’s ever been stuffed up. Because the medicinal compound used in ointments to relieve nasal congestion – that “Camphor” – is actually extracted from the bark of this tree.

In fact, extracted Camphor oils have been used historically in all sorts of things. Including paint, fragrances, soaps, smokeless gunpowder, celluloid, and cleaning supplies. It’s also a popular culinary spice. And not only does Camphor work as an insect repellent and a flea-killing substance, it also prevents silver from tarnishing.

But Camphor extract gained its worldwide reputation as a “cure-all” for its powerful medicinal properties, notably for treating pain, hysteria, heart problems, and respiratory issues.

Primarily native to East Asia, Camphor – sometimes called “Camphorwood” or “Camphor Laurel” – grows indigenously south of the Yangtze River in China, south to Taiwan and Vietnam, and east into Korea and Japan. Over time, though, it was also introduced in many countries, including the contiguous United States in 1875, where it has become naturalized in most Southeastern states, Texas, California, and Hawaii.

While Camphor’s value today is clearly understood, the trees were held in even higher regard throughout Asian History. Centuries ago in China, Taiwan, and Japan, the Camphor tree was reserved for sacred ceremonial items, including the Chinese “mu-yu” drum used in temples — artifacts so culturally important that the unsanctioned cutting of a Camphor tree was punishable by death.

Later, when ship captains and seafarers learned of the Camphor wood’s ability to ward off moths, it became a highly-sought after material for sea chests and an important export for its native Asian countries.

Over and beyond Camphor’s near magical qualities, mature, 100-foot trees produce uniquely beautiful wood — even from log to log. In fact the color of Camphor can vary greatly based on growing conditions. Generally, though, the heartwood is light brown, often with shades of gray, red, or olive green, and sometimes with darker streaks. And there’s usually little demarcation with the paler sapwood.

While the grain of Camphor can also vary – either straight, interlocked, and/or wavy – highly-decorative burls are quite common. It also has a uniform, medium texture, with a high, natural luster. 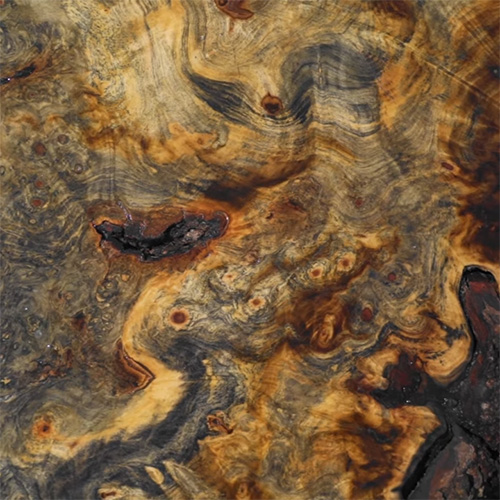