Primarily found in Western United States and British Columbia, Canada, the Douglas-fir, technically, isn’t a fir at all — which is why the name is hyphenated. But it is very similar to several species. So much so that in the past it was called “Pine,” “Spruce,” “Hemlock,” and “Fir,” until 1867, when it was finally given its own genus, “Pseudotsuga,” which means “false Hemlock.”

Named after Scottish botanist David Douglas, the Douglas-fir is a large tree that grows up to 275 feet tall along the west coast and nearly 140 feet tall in the interior regions. It’s also a species of great longevity, with Douglas-firs commonly living as long as 500 years, and some of the oldest trees reaching 1,500 years old.

Renowned for its strength, durability, and ability to stand up to the elements, the Douglas-fir has been an important lumber for many peoples over many millennia. For thousands of years, indigenous peoples in British Columbia not only relied on the wood of the trees for pit cooking fuel, fishing hooks, and handles, they also used the boughs of the trees for floor coverings in their lodges and sweat lodges. Then in the late 1700’s, European explorers – including the British Captain, James Cook – discovered the superior qualities of the Douglas-fir as ship masts or spars.

In modern times, the Douglas-fir has remained a vitally important, incredibly valuable commercial timber. Not only do the trees grow very large – yielding huge amounts of useable lumber and veneer – Douglas-fir also has the highest strength to weight ratio of any wood species, making it one of the hardest and heaviest softwoods commercially available in North America. So it’s one of the best timbers for heavy structural purposes in building and construction projects. And, in fact, Douglas-fir CVG flooring has been used throughout the United States since the 1800’s, and is often found in classic historic homes.

As strong as it is, Douglas-fir trees are just as beautiful and practical. Commonly grown as both ornamental trees and Christmas trees, the species grows so readily it’s often used after wildfires as a pioneer species in reforestation projects along the Pacific Northwest coast.

A clean, elegant wood, the color of Douglas-fir can vary based upon age and location of the tree. But, overall, it’s usually a rich, brownish tan color with hints of red and/or yellow, sometimes with darker growth rings. While the golden yellow to orange red heartwood darkens with age to a reddish tan hue, the sapwood generally remains a light tan to light yellow color. In quartersawn pieces, the grain is typically straight and plain, but flatsawn pieces of Douglas-fir can exhibit wild patterns. It has a medium to coarse texture, and moderate, natural luster. 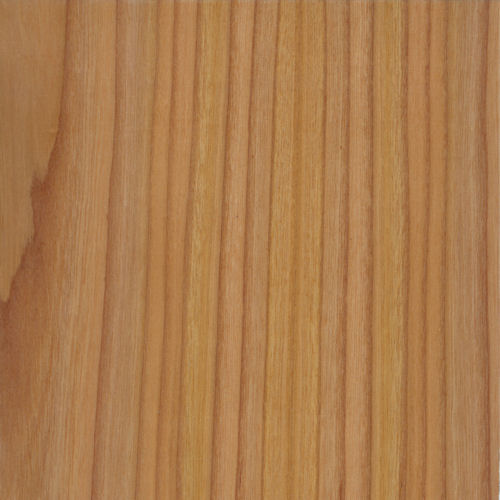