The species that produces the universally loved edible nut, The European Walnut originally grew natively in a wide geography stretching from the Balkans to Central Asia — across Iran, Southwest China, and the Himalayas. Which is why, among its many alternative names, it’s sometimes referred to as “Persian Walnut.”

In fact, the Persian reference marks the beginning of the European Walnut’s fascinating, diverse history. One that dates back to the fourth century BCE, when Alexander the Great brought the “Persian nut” back to his ancient Greek kingdom of Macedonia after his conquests of Southwestern Asia. Quickly valued as of the world’s finest woods, the superior quality walnuts the tree produced became beloved as both a delicious food source and for the richly flavored cooking oil they produced when pressed.

Naturally, the European Walnut became a staple in Roman life as well. In fact, the botanical name for Walnuts, “Juglans,” originated from Roman mythology. As ancient myth tells it, when the chief Roman god, Jupiter – or “Jove” as he was also called – lived on earth, he dined on walnuts. So the Romans called the fruit “Jovis glans,” meaning the “the glans of Jupiter.” As the Roman empire expanded, so did the footprint of the cultivated form of the species — which stretched from Northern Africa up through Europe as far north as England.

By the Middle Ages, European Walnut was established throughout its namesake continent, where it became a favorite timber of Old World craftsmen. And, no surprise, was – and still is – simply referred to as “Walnut” or a regionalized version like “English Walnut” or “French Walnut.”

In the 17th century, the species was first introduced to the Americas by English colonists, then California specifically in the early 1800s by Spanish monks. As it grew popular throughout North America, the name “European Walnut” was popularized to distinguish the newcomer from the native species of Walnut.

Harder and heavier than the American varieties, European Walnut has always been prized by fine woodworkers for its durability, luster and chatoyance — it truly is one of the world’s finest woods.

And one of timeless beauty, revered with the same aesthetic awe today that it was 3,000 years ago. While the heartwood of European Walnut ranges from a lighter pale brown to a dark chocolate brown with darker brown streaks, it can sometimes have purple or orange overtones — with all the colors sometimes bending and swirling in a way that gives the wood a unique, smoky appearance. The sapwood is nearly white. And the grain, while usually straight, can be irregular and occasionally figured with curly, crotch, bee’s wing, or burl patterns.

CITES Appendices: Not listed
IUCN Red List of Threatened Species: Listed as being near threatened. Technically, it doesn’t meet the Red List criteria of a vulnerable or endangered species, but is close to qualifying and/or may qualify in the near future. This listing is for the wild populations of the tree — it should be noted that nearly all of the available lumber comes from cultivated trees. 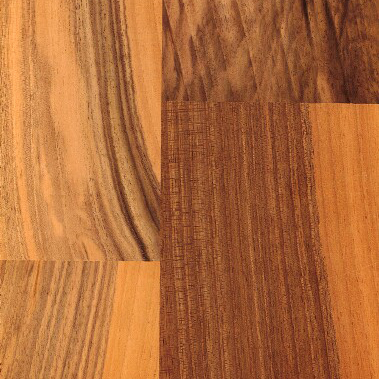